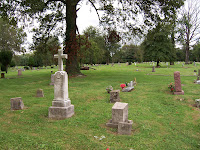 For those of you who celebrate Halloween or Samhain, I hope you have a wonderful and safe time.


Please enjoy three short stories of the macabre I've posted below. Two of these stories can also be found on my website along with other flash fiction pieces.

Panic crushed brittle ribs, pierced aching lungs. A strangled gasp escaped her bruised throat moments before algae-caked water seeped into a slack mouth, stung nose and eyes. In excruciating slow motion, the pond closed over her head. As consciousness faded, she prayed her killer would stop. She’d changed her mind.

“Nervous?” Big Edna asked as she led the way upstairs.

“No, ma’am,” Henry replied, voice cracking. He swallowed as Big Edna’s hips swayed provocatively under her ankle-length black skirt. She didn't attract him, but the promise of what she offered assailed his hormone-addled mind, caused him to grab the railing until his dizziness passed.

Big Edna stopped on the second floor landing. Henry, attention focused on the attic and rooms unknown, bumped into her Rubenesque form.  She turned and looked down, cocking an eyebrow in amusement. Henry flushed, suddenly aware of his blatant eagerness. He reddened even more when he lifted his head, only to look straight at her ample bosom pushing against the burgundy corset. He swallowed, focused on her red hat with its ostentatious pink ostrich feather.

“Last chance to turn back if you’re afraid.”

Henry shook his head. Upstairs, women who smelled of soap and rose water waited, beautiful women with long flowing hair and slender limbs. Only Big Edna stood between him and ecstasy.

She nodded, allowed him to pass. He started up the stairs, eyes wide, mouth slightly open. He never saw her cruel smile.

Whistling, she went downstairs to sharpen the knife.

I hear them drawing nearer, their voices rising and falling. In my mind’s eye, I watch them wind their serpentine way around the meadows and hills in this danse macabre. Nervous laughter gives way to raucous cheers as the new recruits reach out a tentative hand to the last person of this human chain.

But I stand alone, commanded by the Angel of Death to play and charm these new denizens of the underworld while he leads them to the scales where good deeds are weighed against bad ones. As expected, the virtuous are escorted to Paradise while their unlucky counterparts are left to wander as earth-bound spirits.

It’s the screams of the ones left behind that I can't stand. Nor does my music soothe them. Their howls and wails unnerve even Black Shuck, the Angel of Death’s canine companion. He whines and licks my hand until I pat his head and murmur consolations.

Perhaps it’s better that I don’t see the contorted faces and pale, blood-streaked cheeks of these tormented souls. The Angel of Death agreed, which is why he blinded me before requiring my services. I am under his protection for eternity.