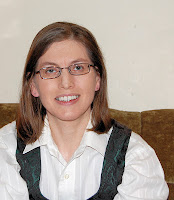 Pamela Turner’s love for the paranormal began in elementary school, where she discovered anthologies filled with ghosts, witches, vampires, and other creatures that go bump in the night. Then there was Rod Serling’s Night Gallery and that creepy doll. Fearing her Raggedy Ann doll would steal her soul, Pamela made the doll face the wall before she went to bed.

Despite this, her interest in the supernatural continued. In middle school, she penned her own tales of terror. Fellow students enjoyed them, and she dreamed of becoming a published author.

After a short stint as a freelance magazine writer, she decided to return to writing fiction.

Now she writes paranormal suspense featuring vampires, dragons, angels, and demons. Just don’t expect her angels to always be good or her demons to always be evil.

Her works include The Ripper’s Daughter, When Angels Threaten, and Exterminating Angel.  She’s also published short stories in anthologies and is an award-winning screenplay writer.

Many of her stories are set in Louisville, Kentucky where she lives with her daughter and herds three rescue cats. When not writing, she enjoys anime and manga, weaving, aviation, cemeteries, and abandoned buildings.