Stalking Shade is one of the first books I ever wrote. Originally written in 2007, when I was in high school, it was my contribution to the Char-Lan Writer’s Club.

We may not have been very creative with the name (although we always intended to give it a better one), but we did decide to make the year something special. We decided on a shared creative project. From then on, we worked on our characters and stories. Some didn’t finish their stories, some were short, and some (like mine) longer.

The inspiration for our series was another teacher at our school who had left that year. He had been the CWC founder the year before, and obviously numbered among our favorite teachers. So we decided to immortalize him in fiction as the Spenta Michos.

Of course, we had rules (some of which I’m breaking in pursuit of finishing up the trilogy). No one could call the SM by name — all mentions of who he was had to be subtle clues using his occupation and quirks. And, of course, no one could find him. Because, we thought it very fitting that since he had mysteriously disappeared from our school, he should mysteriously disappear in the story, too.

The best part about writing a shared-world story is seeing what characters the other contributors come up with. Across the board, we had a wide selection:

A man who ages backwards (Matheson).

A kleptomaniac afraid to leave the house (Tree).

Due to the nature of some of the characters, I wasn’t able to use all of them in my book. The first book uses Matheson only briefly (because he attended a certain meeting), and Heaven a bit more. Because of her use in the first book, I decided to include her in the rest of the trilogy. She plays a stronger role in the second book, Out of the Shadows, and makes a cameo in the third book as well.

The group might have been the inspiration to write the first book, but the inspiration for the series was Lori herself. I had so much fun with her — and given the way the first book ends — that I decided there needed to be more. In fact, I’m having a hard time letting go of her still. She’s a very unique, fun character.

And now it feels like a dear friend is moving away. With the release of This Blackened Night, the trilogy will come to an end. Lori might be a prickly character, not easy for anyone but Terrence to love, but I had a lot of fun with her. When I wrote this third book late last year, I dragged my feet to see it finished for the same reason. I didn't want to let the pair of them go. A not-so-secret part of me is hoping for an overwhelming response from readers asking me to continue so I have an excuse to revisit my favorite characters. Maybe you'll fall in love with Lori and Terrence every bit as fiercely as I have. Lori might be stubborn in pushing people away, but Terrence is the most persistent character I've ever written. Good thing, too.

Join me in celebrating the release of the third book! 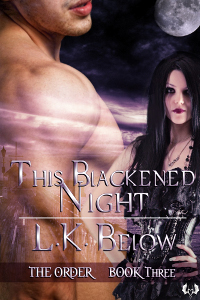 This Blackened Night by L.K. Below

With murders cropping up all around, who should she trust?

After months of searching, Lori finally scrounges up a clue as to the whereabouts of the missing leader of her secret organization. But her vision isn't encouraging--it points to her vampire companion Terrence as the culprit.

Terrence is adamant that he isn't at fault. Even though she knows she might be walking into a trap, she follows his lead to a shabby island port. When her informants start turning up dead with puncture wounds in their necks, Lori wonders just how well she knows Terrence. And why does he act different during the search than in their hotel room?

Lori doesn't know who to trust anymore. She only hopes that she won't be the next victim.

Learn more about the series as a whole on the Lyrical Press, Inc. website: http://bit.ly/TheOrderSeries.

Read an excerpt from This Blackened Night at http://bit.ly/ThisBlackenedNight.

Bio: If L.K. Below gets far too attached to her characters, well, that's because they're interesting people. Read two of her favorites in her urban fantasy series, The Order. Join her online at www.lbelow.net to learn more. Want to keep up to date with her tour stops? Follow her on Twitter (http://twitter.com/LBelowtheauthor) or Facebook (http://www.facebook.com/pages/LK-BelowLindsay-Below/355586159614)

Anonymous said…
Loved this!:) It's my type of story-telling:) This sounds like a very interesting plot:)Good job, gal!

K.R. Morrison said…
Sounds like an interesting read. I know what you mean by not wanting to see the end of your favorite characters. You get so involved with their personalities and their lives that it does seem like you enter a different world when you write about them. Then when they're finished, it is very hard to let go. As a reader, I find that true too. When Tamar Myers wrote the last of her Pennsylvania Dutch mystery series, I felt hollow after I read the last page. Your readers will feel that departure too. I hope they want an encore!!
September 25, 2012 at 1:14 PM

Teresa Reasor said…
I love those prickly characters that make the hero work a little to love them or get them to let down their barriers. So much more interesting than them just falling all over each other without any conflict. It's often the ones who are hard to let close whose emotions are the strongest and sets the book apart.

Debbie Christiana said…
Love your cast of characters and their names. You're books sound awesome. Good luck!
September 25, 2012 at 3:19 PM