Do you listen to music when you read? How about when you write?

I usually listen to music when doing either and find the music helps me tap into a certain mood or emotion. Unfortunately for people who are in listening distance, this means I often play the same song or album over and over again. ;)

I listened to Amy Winehouse’s Back to Black album every night when writing a book a few years back. Recently, I listened to Garbage’s #1 Crush for several nights when working on a scene when a lover professes his almost obsessive love. And then when working on a love scene, I found an old CD I had of the Red Shoe Diaries soundtrack.

Speaking of soundtracks, since I’m a huge fan of vampire books and movies, I’m thrilled that some of the vampire movie soundtracks are really quite good. I have soundtracks to Interview with the Vampire, Queen of the Damned, Bram Stoker’s Dracula, and my new favorite, discovering new music from what’s played in the True Blood TV show.

Now I have the magic of iTunes and Spotify to help me make playlists related to my books. When creating my site, I wanted to share these with readers so you can get the feel for the music used in my stories. My series with Ellora’s Cave called Underground Encounters focuses on characters who meet in the Goth club Vamps. Not surprisingly, music has made it into my stories – both for what the characters hear and what they play. I think their choices reflect their personalities in a way, too.  For instance, Tristan Stone, a dark brooding character in my upcoming book, Fiery Nights, listens to Nine Inch Nails when contemplating the loss of his love, Maya. While Nike, the heroine in my book Smoldering Nights, plays Fiona Apple’s On the Bound while trying to process her overwhelming attraction to the man sitting next to her—or not necessarily a man after all after he reveals his story—and his fangs.

You’ll see a playlist of soundtracks mentioned above, music in my books, and my Halloween playlist, which I play year-round, on my Web site at www.lisacarlislebooks.com.

I’m also here to announce the recent release of Smoldering Nights, the first in the Underground Encounters series. Without further ado, here it is: 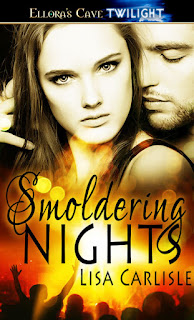 Nike loves visiting the goth club Vamps—she can exchange her firefighter uniform for a slinky fantasy outfit. There she runs into the man she’d been admiring from afar at a rock climbing gym. He’s been the star of all her sexual fantasies, so is it any wonder they end up in his private room upstairs? Just when things begin to heat up, Michel’s enemies appear.

Only Michel isn’t an ordinary mortal. And someone from his past is on the hunt for vengeance. Michel and Nike are forced on the run and hide out in a coastal cottage in Maine. They can’t resist their attraction and spend the nights exploring each others’ bodies while trying to sort out how they feel about each other. Can they overcome their differences to be together? And how will they evade the predators who are chasing them?

An Excerpt From: SMOLDERING NIGHTS

We squeezed through dancers to make our way to the darkly lit bar guarded by more stone gargoyles on each end. Just as we made it to the other side of the dance floor, I felt someone watching me.

In all the times I’d come here, dressed in all kinds of tight, miniscule outfits, never had I felt so exposed. I wished I wasn’t wearing a laced-up black leather dress that exposed a lot of cleavage and was tight enough to show a pimple on my ass.

He was sitting on one of the dark-red leather stools, facing the crowd. I looked up at him twice and caught his eye quickly both times before I looked away. Those ice-blue eyes were so penetrating. Each time I’d caught his eye at the rock climbing gym, I’d have the same reaction—I’d look away quickly.

Why didn’t I have the guts to say hi? He was just another guy. So why did he have that effect upon me? There were tons of hot guys with jacked bodies at the gym. This one—only this one—made me react this way, like a zombie unable to speak.

My palms were beginning to heat up and I was painfully aware of the sound of my heartbeat despite the reverberation of the pounding bass around us.

Oh God. He was speaking to me. Whenever I heard that sultry voice and the French accent, I trembled slightly inside. Was there anything sexier than a French accent? During my brief semester in the south of France my junior year of college, I was in a constant state of sexual arousal with sounds of the French language all around me. Especially when purred by hot French men.

I opened my mouth to answer, but nothing came out. Maya elbowed me.

“Ye-yes,” I stammered, trying to sound nonchalant. “I go to Rock Hard Climbing.” That’s where he worked. “I’ve-uh-seen you there.”

Maya said, “I’ll catch up with you later.”

He nodded at her before she moved down to an empty spot at the other end of the red and black marbled bar.

Damn it. How could she leave me alone with him? She must have figured out he was the guy I often drooled about, when she saw me clam up like an idiot.

I stared at Maya as she scanned the crowd on the dance floor, shooting invisible daggers at her back. I’m going to kill her later.

In all those months fantasizing about this guy, never did I think it would start as awkward as this. Perhaps he’d smile at me first or nod hello at the gym. Then one day he’d ask if I needed a hand with something. Maybe compliment me somehow. I would appear a bit aloof. Each time I went to the gym after that, things would progress nice and slow. We’d gradually talk a bit more until he finally asked me out.

He snapped me out of my thoughts when he said, “I thought I recognized you. You look—” he paused, “different.”

Never, NEVER, did I think our first conversation would be in some underground club with my breasts pushed up against a leather laced up bodice, accentuated by a brooch with a silhouetted skull.

I’ve loved the vampire myth since I was in third grade and had a crush on Dracula (rivaled only by my eternal love for Darth Vader). When I was younger, I served in the Marine Corps and backpacked around Europe on my own, which has provided me enough settings and characters for a lifetime of writing. Now I live in the Boston area with my fantastic, supportive husband and two kids. I’m very happy to be a multi-published, award-winning author writing in different genres.

Disclaimer: I go bat-shit crazy before Halloween and start decorating my house on October 1st. You can never have enough gargoyles.
Lisa Carlisle
lisacarlislebooks.com

PamelaTurner said…
Thanks for stopping by. :-) I didn't know about the vampire movie soundtracks. Recently, a former high school classmate introduced me to Nox Arcana. I think I might try writing to them. Usually, I can't write to music, but I'm willing to give it a try.
September 18, 2012 at 5:17 PM

Unknown said…
Lisa,
I too have to be listening to music to get my creative juices flowing. Unfortunately, (fortunately for hubby) I use my earphones so I don't disturb his TV. All kinds of music inspire me and I'm going to check out those movie soundtracks. I have a song from Queen of the Damned, "Forsaken" that I just love and already have downloaded on my phone. Thanks for sharing and you could post this on the yahoo group page as well if you'd like.
Keep Reading!
Jodie Pierce
September 19, 2012 at 1:36 PM

Lisa Carlisle said…
Jodie, I had to listen to it after reading your comment and it looks like there are two versions.
Good idea about the yahoo group. Thanks.
Lisa
September 19, 2012 at 9:11 PM

Teresa Reasor said…
I really do wish that I could listen to music while I write but unless it's elevator music, I have a tendency to sing along and it breaks my concentration. So possibly a soundtrack.
Teresa R.
September 20, 2012 at 9:36 AM

Lisa Carlisle said…
Hi Teresa,
I love how you end up singing!
Give a soundtrack a try and let us know if you find any good ones.
Lisa
September 25, 2012 at 8:06 AM