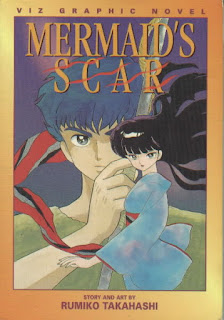 It's October. You know what that means. A celebration of all things horror. People are listing their favorite horror movies and books, but I decided to be a bit different. I'm listing my top five favorite horror anime/manga.

In no particular order:

5. Hellsing
A manga by Kouta Hirano, Hellsing is the story of Alucard (get it?) who works with the Royal Order of Protestant Knights, led by Integra Hellsing, descendant of Abraham Van Helsing. The manga and anime don't shy away from the violence and bloodshed, and Alucard revels in attacking and defeating his enemies. That's what makes this manga and anime such a guilty pleasure.

4. Tokyo Ghoul
I've only started watching the anime version of this, but it's an interesting and disturbing premise. A young man is attacked by a ghoul and becomes one himself. His struggle to deal with his impending change, while trying to retain his human qualities, is complicated by society's belief that all ghouls are dangerous. I'm interested to see where this anime goes and to check out the manga.

3. Tomie
A manga by Junji Ito. I've read a few of his collections, and he's very effective as a horror manga-ka. Tomie is a disturbing story of a young woman who will not die, even after being hacked to pieces. She's the quintessential undead character, a woman whose beauty and desire drive people to murder her, but who always comes back. Always. Always.

2. Vampire Princess Miyu
At first glance, this beautiful, ethereal young vampire doesn't seem at all disturbing. Until you find out that eternal happiness is a horrible alternative from reality. Narumi Kakinouchi's vampire/guardian is an interesting anti-heroine. She returns the Shinma (god-demons) to the dark, but the impact her and these beings have on human life beg the question of who might be more dangerous.

1. Mermaid Saga
If only Rumiko Takahashi would continue and/or finish her saga of the 500-year old immortal Yuta and his equally immortal companion, Mana. A fisherman in ages past, Yuta ate the flesh of a mermaid. Not only did he survive the encounter, he watched his friends either die a horrifying death, or turn into monsters when they consumed the same flesh. The stories that comprise the Mermaid Saga (Mermaid Forest, Mermaid's Scar, Mermaid's Gaze, etc.) spin a cautionary tale of immortality and the horrifying results that can manifest from people desperate to attain eternal life.