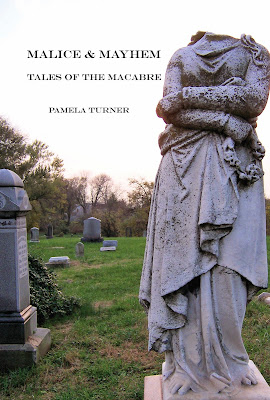 This month, I finally achieved something I'd been wanting to do for the past two years. I self-published my first collection of short dark suspense stories on Amazon, both for Kindle and the upcoming print edition. Malice and Mayhem: Tales of the Macabre are eleven stories, five previously published, that deal with how strong emotions like jealousy, obsession, and vengeance can often have detrimental, even deadly consequences.

I noticed that many of my characters, both in my short stories and in my longer works, are often seeking vengeance or are obsessed with wanting something, no matter how dangerous it might be. In "Obsession," Corinne cannot get over the fact her dead ex-boyfriend had a girlfriend before her, and she's determined to use necromancy to find out who he loved more. In "Family Tradition," a cursed kris (wavy dagger) forces a young man to commit murder, and he finds getting rid of the weapon is a lot harder than he expected.

These stories are influenced by the dark suspense shows of my past, namely Thriller, Night Gallery, and Alfred Hitchcock Presents. The idea is not to slather the stories in gore for the sake of scaring readers, but to leave them feeling uneasy. (Although there are some graphic descriptions, the overall rating for the book would probably be 14 and up.)

You can find out more about Malice and Mayhem and read the entire first short story, "It's in Your Blood" by clicking here.

Sometimes, there's truth to the warning, "Be careful what you wish for..."