When writing the first novel in my paranormal romance trilogy, The Garnet Dagger, I created another world for my characters. However, when I was world building there were several things that helped me.

It has to be believable. Yes, I know this is a ‘fantasy’ world and we are only limited by our imaginations, but there also has to be logic. For example, if sharks swam in sand instead of the ocean, would they still have gills? Or would they have another way to breathe? Sometimes our own world can help us. Nature is fascinating. I used hornet behavior for my Bergone characters. If a hornet is killed, it releases a chemical or pheromone that alerts other hornets from its nest to attack. If this chemical gets on a person, clothes, etc. it can also trigger an attack.

Keep accurate notes. I made this mistake. I had meshed two mythological creatures into one and called it a different name. Unfortunately, I had to remove this snippet from my novel because when the editor asked what this was, I could not find the two sources I had researched years before. Notes are always a good idea even if you do not use the material in a current story as it may fit better in another.

There has to be some similarities with our world for readers to relate. If the world is too convoluted with otherworldly ideas and words, the reader may become lost. What I did was create a limited vocabulary the reader would need to know, and in some instances, I made it a similar word to our own or a lesser known word. Say you want a Rowan tree in your story, but you do not want to call it that. Looking up the other names and folk names of Rowan the encyclopedia has: mountain ash, Dogberry tree,  Old Norse raun, Quickbane, Quickbeam, Quicken, Quickenbeam, Ran tree, Roan tree, Rune tree, Sorb apple, Whispering tree, Witch wood, Witchbane, etc. Any of those names would work or a combination. Sometimes the Latin name tweaked with your imagination.

Finally, world building is massive, especially how different from earth you want it. Take it one step at a time. It is both extensive and rewarding. Ironically one of the best parts for me is a reader asking questions about the world cause they enjoyed it and the novel, but that it did not distract from the story and characters. 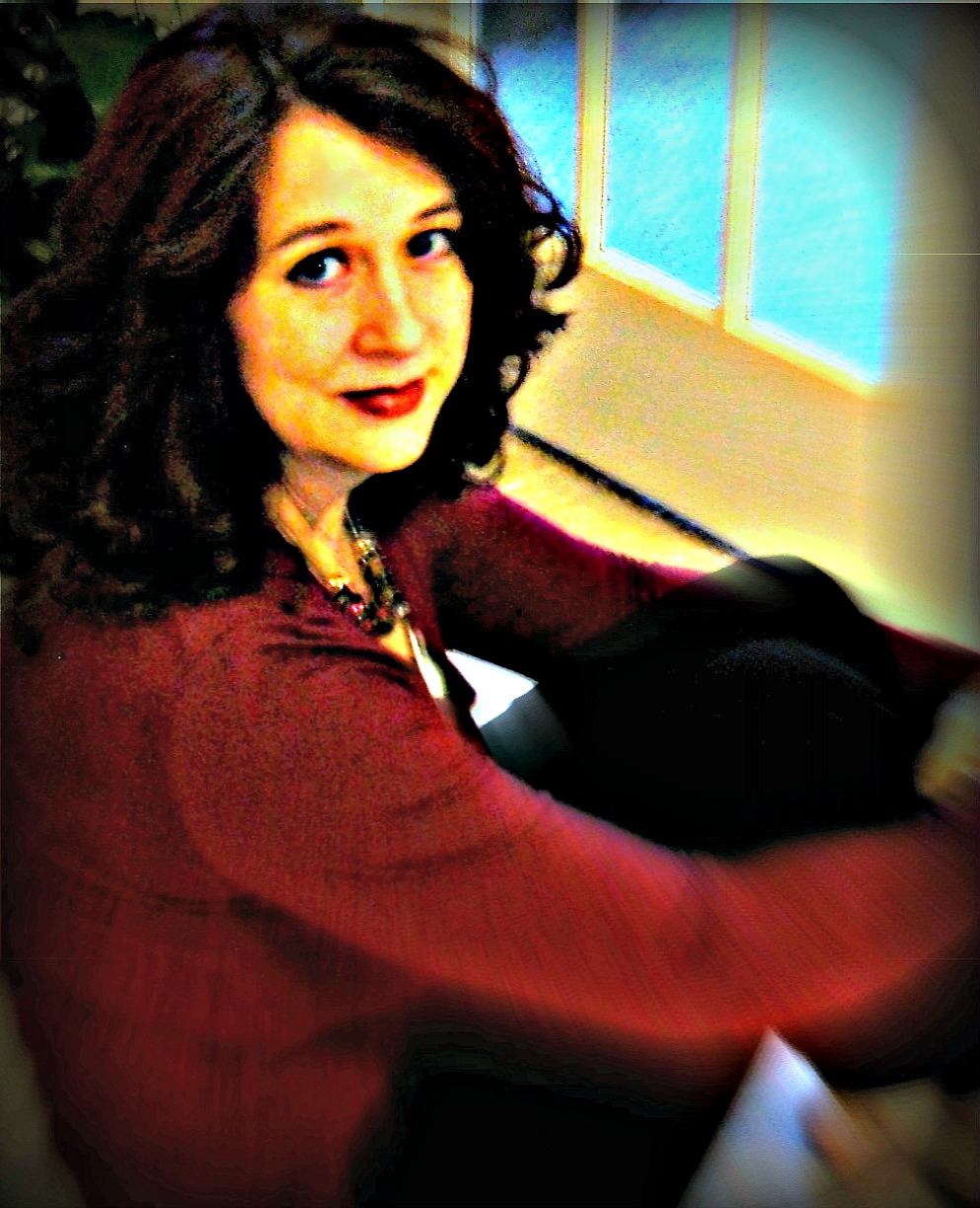 Andrea’s Bio: Growing up in Houston, Texas, Andrea has always enjoyed creating characters and stories. But it wasn't until she was in her late twenties that she started writing novels.

What happened that ignited the writing flame in her fingers? Divorced, and disillusioned by love songs and stories. They exaggerate. She thought. Love and Romance are not like that in the real world. Then she met her husband and realized, yes love and romance are exactly like the songs and stories say. She is now a happy wife, and a mom to three kids (two boys and a girl).

Andrea writes paranormal and historical romance. When not writing or reading, one may find Andrea dancing in Zumba.

The Garnet Dagger is her debut novel and is a paranormal romance with Crimson Romance. 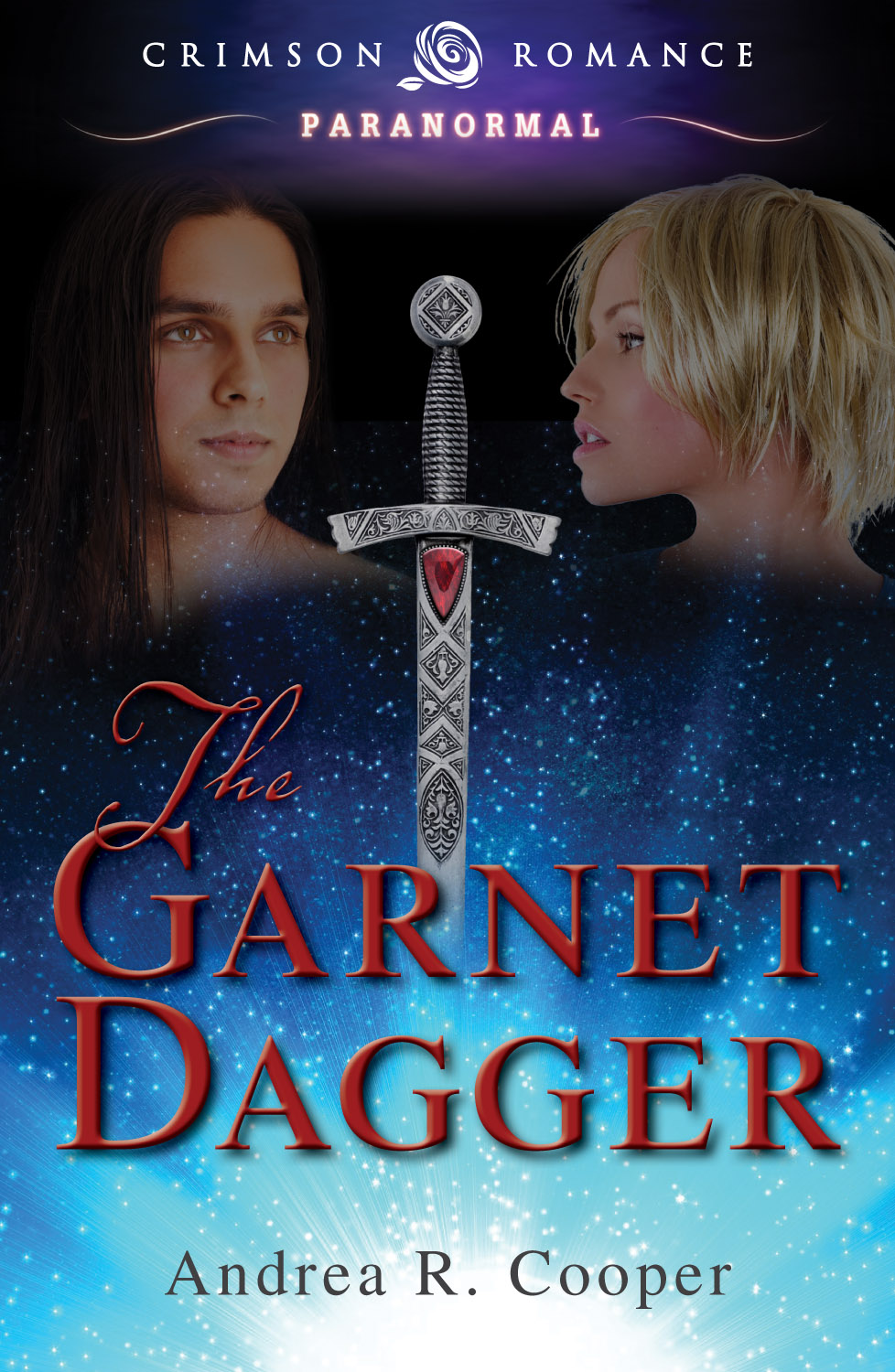 Excerpt:  Chapter One
I’ve known death. For over half a millennia, I escorted many to death at the end of my sword. In the eyes of the dying, I watched it shroud them. Foolishly, I thought many more eras would pass before death came for me. It came so swiftly that I could not run; I could not escape. At a village, dressed in human clothes, I took in everything. By observing for eons, I understood and spoke their language. The world of mankind fascinated me. Their hobbled homes burrowed into the ground.

Rocks crunched on top one another with thatched roofs woven from straw. Never had I seen a home or inn that was higher than three levels, as if they were afraid of the sky. I delayed my return to my people as I watched human jugglers bounce torches and knifes. It was autumn equinox and the festivities would continue well into the night. Children laughed as they chased each other. A trail of leaves from their costumes twirled after them. It was dark when I reached the forest. Since I was already late, I hiked uphill to a shortcut rather than take the long path back home. I didn’t need to alert any of my kind near the barrier at this hour. Liana would wonder why I was late.

Tonight was the two month anniversary of our hand twining ceremony. One more month as was custom, and then we’d be wed. A gasp rustled through the trees. The roots shot a warning through to me with stifled caution. Adjusting my pack, I continued on instead of changing back into my Elvin clothes. After I passed the border which kept humans from entering our land, then I’d change. In the distance, I heard a groan. Curious,
I spun in the direction of the sound. The autumn wind breezed through my worn human clothes, chilling me. But someone needed help. I turned in the direction of the sounds. Whatever made the noise should be a few yards ahead.

I hiked slower than my normal speed, so as not to startle whatever human called out. My leather boots crunched upon dried, diseased leaves and bark. Horrified, I glanced up. Branches twisted around each other to suffocating. Lifeless limbs cracked in the wind. Flesh of the trees sloughed off in layers, exposing its bones. Gashes hollowed out chunks of warmth. Fragments of leaves clung to finger tips, marking sepulchers of the dying trees. Trees mourned with wails like splitting wood, and I brought my hands over my ears. I must flee before I became infected, they told me. Flee before the stain of this defilement creeps into you, they warned. Trees spoke to my kind, always had. Yet these trees were in such agony of death that I could not breathe. Felt as though my lungs had folded in on themselves, like a moth unable to break loose from its cocoon.

Nothing I could do for them, and if I lingered too long, whatever disease gnawed upon them may choke me. Where would I go if I carried something so foul as to devour trees from the inside out? I’d never return to Tamlon if I brought this infection with me. I drew away, but a movement at the base of a decaying tree to my right caught me. My night vision picked up the sight of a human. His sallow face seemed to glow in the moonlight. Poking out from rags lay his arms and legs, which resembled skin stretched over sticks. So cadaverous was his face, I’d have thought him dead if he hadn’t moved.

“Please,” he said and his voice sounded like cicada’s vibrations, “help me.”

“What ails you in this troubled place?” I wondered if my voice, foreign to my ears in speaking the human’s language, revealed my nature.

“I am lost.” His dark eyes crinkled around the corners. “Without strength to rise. If you would but assist me up, I’ll be on my way.”

I’d never touched a human on purpose before. Was it that that gave me pause, or dread that stilled my heart? My feet itched to flee. As soon as I helped him, then I’d leave. I gritted my teeth and reached a hand down.

His gnarled fingers snapped on my arm, making me wince. Jerking me forward, his face contorted. Surprised by his strength, I fell beside him. Blackness curled around me. Teeth, fangs, broke through the skin on my neck. Then I knew him for what he was, a vampyre.

Andrea is giving away an e-book copy of The Garnet Dagger to one commenter. The contest ends May 6 at 11:59 PM. Good luck!
Andrea Cooper Crimson Romance paranormal romance world building

Unknown said…
Good worldbuilding tips with good examples, too! It is definitely a challenge to build a world that is interesting yet uncomplicated enough that readers can relate.

I'm glad you enjoyed the tips. As I write and publish more book, I hope to add to the list.