It’s the month of October, when things that go-bump-in-the-night creep to the forefront of our minds. I’ve been fascinated by folklore, superstition and tales of supernatural creatures since childhood. Do thoughts of ghosts, ghouls and predatory beasts frighten me? *chuckle* They terrify me.


So why turn a werewolf into a romantic hero in my debut release, WEATHERING ROCK? Because there’s something compelling about a tortured soul chained to darkness and moonlight, especially when the character is noble at heart. I’ve always been attracted to heroes and heroines who harbor a dark secret, forced to carry the burden of a seemingly insurmountable curse. Maybe it goes back to childhood fairytales where hexes and curses were as common as the heinous beasts and evil sorcerers who populated them.

The werewolf myth is ancient. The first ‘recorded’ sighting dates back to 1591 Germany, when a man named Peter Stubbe made a pact with the Devil that allowed him to shift into a savage wolf. He was eventually discovered, caught, and suffered a brutal execution, but not before killing innocent men, women, and even children, in a hideously barbaric manner.

Older still, there are some who say that when God cursed Nebuchadnezzar, the King of Babylon, and drove him from men so that he “did eat grass as oxen, and his body was wet with the dew of heaven, till his hairs were grown like eagles, and his nails like birds” that the disgraced king had become a werewolf.

Norsemen had fierce berserkers who were savage in battle and often adorned themselves with wolf or bear skins. Many cultures believe that by wearing the skin of an animal, an individual can assume its characteristics. Native Americans spoke of skinwalkers who had the ability to transform into other animals at will. In Greek mythology, the Arcadian King, Lycaon, made the fatal mistake of trying to kill Zeus by having him dine on human flesh. Zeus cursed him to spend the rest of his life as a wolf.

I don’t think any of these ‘early’ werewolves would pass muster as the romantic, tortured soul, harboring a dark secret that I find so intriguing, but the myriad threads of the werewolf legend are interesting to say the least.

WEATHERING ROCK debuted the end of September, and I’m still basking in the release day glow. My lead character, Caleb DeCardian, is a werewolf who has traveled through time from 1863. My heroine, Arianna Hart, meets him when their paths cross on a fog-drenched night. She nearly runs him down with her car when he’s on horseback (what other mode of transportation would a man from 1863 use? ). I invite you to give it a look-see: 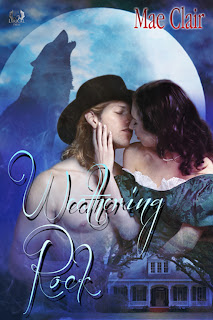 WEATHERING ROCK BLURB:
Drawn together across centuries, will their love be strong enough to defeat an ancient curse?

Colonel Caleb DeCardian was fighting America’s Civil War on the side of the Union when a freak shower of ball lightning transported him to the present, along with rival and former friend, Seth Reilly. Adapting to the 21st century is hard enough for the colonel, but he also has to find Seth, who cursed him to life as a werewolf. The last thing on Caleb’s mind is romance. Then fetching Arianna Hart nearly runs him down with her car. He can’t deny his attraction to the outspoken schoolteacher, but knows he should forget her.

Arianna finds Caleb bewildering, yet intriguing: courtly manners, smoldering sensuality and eyes that glow silver at night? When she sees Civil War photographs featuring a Union officer who looks exactly like Caleb, she begins to understand the man she is falling in love with harbors multiple secrets--some of which threaten the possibility of their happiness.

Finding a decent guy who'll commit is hard enough. How can she expect Caleb to forsake his own century to be with her?

WEATHERING ROCK EXCERPT:
“Stop it!” Arianna shook off Wyn’s grip, pivoting to face him. “Are you crazy?”

Before he could answer, something slammed against the door. Caleb screamed. The sound knifed through her like the violent jolt of an electrical wire.

“Caleb!” She launched herself at the door, panicked and terrified by the thought of the man she loved in horrific pain.

“Don’t!” Wyn stiff-armed her aside and grabbed the knob, forcibly holding it in place. “Get a chair. Something, anything! We’ve got to keep him locked inside.”

“What are you talking about?”

“Arianna, get a fricking chair. Now!”

There was another crash, and then a bang as something heaved against the door, making it shudder from top to bottom. Arianna heard a snarl that turned her blood to ice. The door rattled in its frame, weakening as something battered against it. Something inhuman locked in the room with Caleb.

A cold fist clamped over her stomach.

The raw urgency of his voice plowed through her confusion. She darted into the dining room, snagged a chair, and dragged it into the hallway. The thing in the parlor was still hammering away, heaving itself against the door in an attempt to burst through. Wyn’s face was white with strain as he struggled to hold the door shut with both hands. He rammed the top of the chair beneath the knob, wedging it securely into place. A blood-thirsty howl exploded from the other side, kicking Arianna’s heartbeat into overdrive.

“My God, Wyn, what’s going on?” She lurched for the door.

“Don’t. You don’t know what you’re doing.” Wyn caught her around the waist and swung her up against the wall.

She tried to squirm free. “I know Caleb’s trapped in there. We have to help him! There’s something in the room. Can’t you hear it?”

He held her wrists, pinning her arms to the wall. “Listen to me!” His eyes were wild, his face inches from hers. With a single frenetic skip of her heart, she realized he was as terrified as she was.

“There’s nothing in the room. Only Caleb. Do you hear me, Arianna? It’s Caleb.”

“No!” She shook her head, unwilling to believe what he told her, but another ear-splitting snarl fanned her fear higher. Nothing made sense. Not the stark fear in Wyn’s eyes, the sweat-slickened grip of his palms crushing her wrists or the chillingly inhuman sounds coming from the parlor. The man she loved could never sound so guttural or barbarous.

“I don’t care!” She ripped free of his hold. “I don’t care if he’s by himself or in there with something else. You have to help him!”

She lunged for the door, but Wyn grappled her around the waist, holding fast. They were still struggling when the sound of shattering glass rang through the narrow center hall of Weathering Rock. 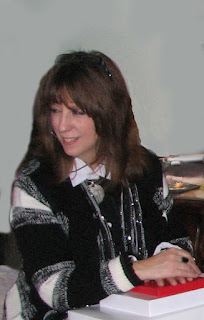 AUTHOR BIO:
Mae Clair knew from the time she entered grade school that she wanted to be a writer. She credits her parents with instilling in her an insatiable love of reading through weekly trips to the library when she was a child. Her father, an artist who tinkered with writing, encouraged her to create characters and make-believe worlds by spinning tales of far-off places on summer nights beneath the stars.

Inspired by folktales, legends and things-that-go-bump-in-the-night, she loves to blend the fantastical with the ordinary. Her heroes are known to be flawed and complex, her heroines capable, independent and sexy.

Throughout the years she has been actively involved in various writing and critique groups and is a past President of the Central Pennsylvania Writers’ Organization.  She lives in Pennsylvania and is married to her high school sweetheart (a.k.a. the Love of Her Life). In her downtime she enjoys reading, digital scrapbooking and unwinding with her husband by the pool when the fickle PA weather permits.   A self-admitted idealist, Mae is passionate about writing, old photographs, a good Maine lobster tail and cats.

LOOK FOR MAE CLAIR AT THE FOLLOWING HAUNTS:

L.J. Kentowski said…
I wasn't much of a werewolf kind of girl until now. Weathering Rock is an addicting novel that is a must read for all paranormal fans!
October 9, 2012 at 12:33 PM

Anonymous said…
Pam, thank you for the opportunity to appear on your blog and wax poetic about werewolves and romance :) I'm thrilled to be here and excited to share the story of Caleb and Arianna!
October 9, 2012 at 12:53 PM

Anonymous said…
Thanks so much, L.J. I'm thrilled to hear that you're enjoying the book and that I'm coverting you to a werewolfy girl! I do love writing about conflicted souls ;-)
October 9, 2012 at 12:56 PM

Anonymous said…
Awesome, Renita. That's fantastic to hear. I'm planning on starting Gossamer by the beginning of the week too! :D
October 9, 2012 at 7:15 PM

Great excerpt! Sounds like we have similar tastes in writing. Tortured werewolves and all... Love it and hope to get it on my TBR list!

Anonymous said…
Glad you liked the interview, Alicia. Thanks for checking it out!

Cindy said…
The excerpt is awesome!

I always loved the idea of the Beserkers actually being werewolves...nifty article.
October 10, 2012 at 10:47 AM