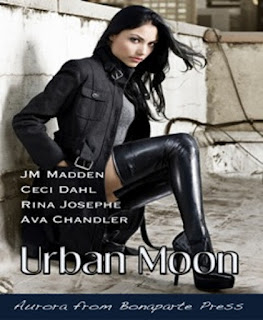 Pam, thank you so much for having me on your site. I don’t get a lot of chances to talk about my poor little lonely Urban Fantasy very often.  I released Burning Moonlight in an anthology in June of 2011 with three other authors. The anthology was called Urban Moon, and I thought it suited our stories perfectly.

I was approached to write the UF early in 2011, and I found the prospect intriguing. I’m usually a contemporary kind of girl, but the possibility of creating a world nobody had ever seen before got me excited. I was a deputy sheriff for many years. When you read my stories, they all have a bit of a law enforcement feel, and I wondered how I could carry that over to a fictional world. I’m definitely a tom-boy at heart.  Wrena popped into my mind, fully formed and with gumption to spare as a bounty-hunter for hire. I love the model on the cover of Urban Moon because she captures Wrena’s essence perfectly.

And J’Har was a dream to write.  I love wounded heroes, and he is wounded enough for the both of them.  He’s turned out by his tribe for having a disfiguring injury, yet reluctantly recruited for a momentous task to save that same tribe.

I loved writing this story and as soon as my schedule settles down a bit I plan on revisiting it.

Here’s the short blurb- Wrena, a Retriever, is hired to bring home a wayward princess while working with J’Har, a Fallen Shirwa. J’Har is a warrior both revered and shunned by her people. Both must complete the task while fighting off their growing attraction in Burning Moonlight.

I love hearing from readers, so if you check out Urban Moon you’ll have to let me know what you think.

Pam, thanks so much for letting me take up digital space!

Anonymous said…
JM, love the premise for your story - did you do any special research for it? I can't wait to read this-my kind of story!