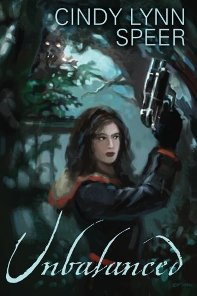 I was staring at my screen, trying to decide what to say about…anything, thinking about the two books I most recently have out, and I wondered…do vampires like chocolate?

It reminded me of the exercise I use when I’m stuck. I doodle write a lot…I think through my fingers, and when I get stuck sometimes I’ll just type anything. Sometimes it helps, sometimes it doesn’t…an interview between two oddball characters of mine from different books, a list of things that they like or don’t like, a Q&A session between me and the character. (The Q&A session usually starts with “And really, what is your problem?”)

OK, then. What can I do with “Do vampires like chocolate?” The thought came about because I was trying to say something entertaining about Unbalanced, my modern day paranormal romance, and The Chocolatier’s Wife, my recently re-released mystery set in a fantasy world that feels more regency than medieval.

One has vampires. One has a chocolate shop. Before I get distracted by entertaining myself imagining how William and Tasmin, the couple who own the shop, would deal with Prince Sevrin, my head vampire (William and Tasmin are pretty proper.  Sevrin is formal, but has a silly streak that most people don’t get to see…) I guess I better logic it out. In my made up reality, vampires are made so by a parasite that is built up in the body after years of being ingested, when the person dies, if they are not too damaged the parasite takes over and reforms their body. So, does this parasite make it impossible for vampires to digest chocolate?  I would assume so…if you are on a diet of blood, and blood has all you need to survive, then your body would probably no longer have the ability to run things through. So I don’t think they would bother.  I know that some stories have vampires throwing things up, but that’s kind of…well, gross. Sevrin would never be so inelegant. 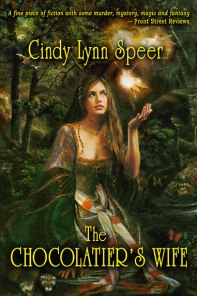 So, I guess not. Which is kind of sad, since I’ve always loved the image of Angel (I’ve been re-watching the TV series off Netflix recently) and his delight when, briefly human, he tastes chocolate for the first time. But perhaps that is why that scene is special? But, this conversation (hopefully not completely one sided) has made me wonder something else. Vampires have extraordinary senses, (usually) right? Perhaps smell, in their world, fulfills the same needs as taste does in ours. Now I have an image of a vampire just breathing in a tin of chocolates. That could be an interesting thing…a piece of a puzzle to characterize a vampire better, to make
that character more round, more real. Because really, it’s all about the pieces in the background, the things we fill in that the reader may only pay a second’s attention to, those details help make the story feel more real.

I’ve doodled a little, and now my vision of vampires has changed a little. It’s a vision that has been developing since I was in college (Unbalanced was the first book I finished, and it took ages to get it right.) mumperty-mump years ago.  But I think that’s one of the joys of writing. Things are constantly changing. 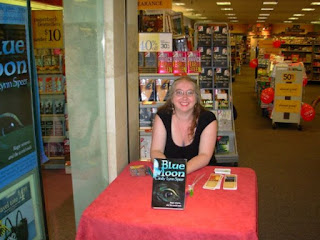 So…do you doodle with words? How do you go about it? Do you scribble scenes? Ask questions?

Dana said…
Oh I LOVED this post - especially the Q&A with characters that begin with "And really, what is your problem?" Believe me, I've considered instituting mandatory a group sessions with some of my characters, or an extended trips to the naughty corner for not listening (or talking) to me!

In all seriousness, I think this approach is a great exercise for getting into the minds and hearts of your characters - details (even the small ones, like chocolate or no) really add depth and dimension.

Carla Richards said…
I don't do that enough lately--just playing with a character, and writing stuff that may never end up in a book. Your post has inspired me.
August 21, 2012 at 2:29 PM

I do a lot of walking and yardwork, which frees up my brain to think out the main structure of my story. At least for this book. The first one was spawned in a very different, which I won't go into here. And, of course, the characters putstuff in here too--I do believe they take on a life of their own, and plan stuff while I'm not looking.


Wow...thanks for the great comments so far!

Anonymous said…
Interesting. I tend to start with an idea and run wherever the characters take me. Then I wonder hmm did I do that all wrong is it a good way or bad way to do it. Maybe they can ingest it in with the blood?
August 21, 2012 at 11:19 PM