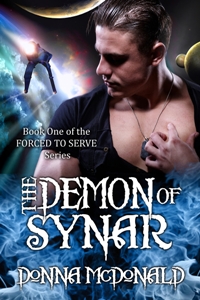 When I attended the local Fandom Fest conference in Louisville over the weekend, I confess I spent most of my time away from the zombies, ghost hunters, and hobbits on the second floor. Instead I stayed on the third floor sitting in on assorted panel driven workshops about the Science Fiction genre, what I thought was my newest genre.

After hearing from a variety of published authors, I’m less sure now of what I’m writing. Is the Forced to Serve series romances? Yes. Is that body of work Science Fiction? Yes—soft Science Fiction complete with planets, aliens, parent ships, shuttles, laser guns, and wrist watch type communication devices. Are there some Fantasy elements to the series? Yes Malachi is a demon, but quite different than those in the majority of demon books.

The net effect of the confusion being that I have less idea than ever about who would conceivably be interested in buying the kind of story I have published. For instance, combining Science Fiction and romance on a spaceship was not deemed to be very marketable these days.

Most soft Science Fiction authors felt Fantasy (think vampires and werewolves) has usurped the readership. Many confessed to branching out into books they never intended to write just to gain a following. Adding romance to the mix was just something normal and most books included some of it. Also I learned that even though Space Opera by definition focuses on the relationships, most stories with that label are very military based.

The Romance genre has a lot of rules, but so does Science Fiction. I discovered my sexy covers that I was so proud of were deemed more appropriate only for Fantasy novels. Oh, and having a demon. . .that isn’t done in SciFi either, or at least not by a virtual unknown author in the genre. Most thought the amount of non-Science Fiction in my Science Fiction turned it into something else, but none could identify what any better than I had been doing.

I left the conference somewhat deflated, but reminded myself that George Lucas received many rejections about his Star Wars idea, a story most thought was lame by SciFi standards too. He called his a “space western”. Well, who had ever heard of that? It isn’t a category in Amazon either.

As a Contemporary Romance author, I wasn’t able to stay completely inside the category rules with my creative work, so I focused on the one or two rules that seemed immutable. I’m not going to be able to stay within the rules in this new genre either though I readily admit it would have behooved me to have researched the wide variety of Science Fiction work sooner. I thought I knew the variety after reading Ray Bradbury and Isaac Asimov in school.

The clarity I thought I would find among fellow SciFi writers turned out to be non-existent among the 30 or so I met. I still don’t know how to categorize the series of books I had so much fun writing. Now I empathize more with Speculative Fiction writers who are lumped into that category because their work doesn’t fit other categories. Did you ever hear a reader say “I love reading Speculative Fiction. It’s my favorite genre.”? There might be a handful out there with that view, but you won’t make a living selling to that small number. With an internet audience, it’s also about finding those readers among the millions and millions online. This is why having your book show up where your interested readers are looking for books is so critical.

I understand the “pick a known category” advice of published authors better now. How can you go looking for an audience who reads your type of book if you don’t know what your type of book really is? I don’t think an author who wants to sell can rely on just hoping that all interested readers will magically see a cover, read the blurb, and plunk down their cash blindly. All readers want some reassurance that what’s inside the covers is the kind of story they like to read.

Donna McDonald's cross-genre book, The Demon of Synar, is free at Smashwords through July.
https://www.smashwords.com/books/view/136867

You can also read her blog here:
http://donnamcdonaldparanormal.blogspot.com/

Marci Baun said…
Hm... From what I understand, there is a pretty big demand for sci-fi romance. You just have to find the audience. Most sci-fi romance is sci-fi/fantasy. So, keep looking and keep your chin up. Even the "popular" genres are tough to sell in. It comes down to how well you can make yourself stand out.

Anonymous said…
Thank you for the free book, can't wait to read it.

Rayne Hall said…
Relax. Genre definitions have become less important than they used to be. The times when you had to pick one genre and stick with it are over.
They stemmed from the days when most books were sold in bookshops, booksellers put a book in just one shelf, and publishers showed the coloured book cover only once in their catalogue because it would have been expensive to include it more often. In those days, genre cross-over books were very difficult to market.

But that was decades ago. Nowadays, genre crossovers sell very well indeed. Most books are sold online, where retailers can put them on more then one virtual shelf. Most catalogues are websites, and it doesn't cost the publisher a penny to repeat the cover under several genre headings.

The strict genre definitions existed only ever in the world of publishing, when editors, authors, booksellers, agents, sales staff and so on talked about them. The general public scarcely understood the genre definitions anyway.

Just write the books you want to write, and don't worry about genre attribution. Seriously. Genre attribution has a fraction of the importance it used to have, and genre boundaries have become so fluid that there's no point worrying about them.

If you're embarrassed when talking to publishing professionals that you can't label your book with single genre, just use publishing jargon. The magic word is "Crossover". It means mishmash, but sounds grander. Well, it means "this novel defies genre boundaries".

So when an industry insider asks "What genre do you write?" you can reply, without blush or hesitation, "romance SF crossover" or any other combination. It doesn't have to be precise, because a "crossover" can contain elements from various genres.

Unknown said…
Thanks for the comments and the encouragement.

Rayne, "Romance SF Crossover" has a nice ring to to it. LOL. I will remember that.

Marci and JM, thanks for the kind words.

Mary, if you read the book, let me know what you think. The first book is mostly world building. The second and third books in the series are more interesting.

Vicky said…
Late to post, but thanks for the free book and interesting blog. I think the question is less "how to fit into publishing" and more "how to approach an audience so they don't expect one genre and perceive another."

Your cross-genre covers look like a great way to send that message to me! I'm looking forward to reading the book.
July 8, 2012 at 11:20 AM