I’ve been making up stories since I was a little girl. In fact, I still have my first “book”, complete with illustrations, written in pencil on lined notebook paper, folded and bound with a red ribbon. I believe I was six years old when I wrote it.

Urban fantasy, time travel, science fiction, paranormal stories fill my kindle and my book shelves, and that’s pretty much what I write. Remember Steven Spielberg’s series “Amazing Stories”? Twisty, quirky little plots, involving someone ordinary, like you or me, and how they deal with something that goes beyond are the kind of things I love.

I had the first scene of Not Long Ago written for at least a year before I went any further with it. It could have gone in a thousand different directions, but the romantic in me knew I had to explore the connection between the man and the woman who saw each other by accident through the coffee shop window. I was lucky enough to submit my work to an editor and an agent who took the time to encourage me to continue writing. They told me my strong points and what I needed to develop further. After I got over feeling rejected, I took what they said to heart and learned. I entered and won short story contests and continued reading, writing, learning, editing. I never gave up.

I get attached to my supporting characters, sometimes more so than my main characters. In Not Long Ago, Arvo, the tailor’s gangly, red-headed son is a charmer with an eye for the ladies, who loves to listen to gossip. He keeps Erin, a young woman who time travels from modern times to a medieval society, informed of castle goings-on. He knows she’s masquerading as a boy but keeps her secret. He even helps her sneak into the Masked Ball so she could dance with the handsome knight, Sir Griffin. In the end, Arvo turns out to be a fast friend Erin can never forget.

When I write, these things are almost always present:  a cup of coffee or Earl Grey in the winter, Pepsi or iced tea with lime in the summer. I’ve been known to snack at the computer, but it has to be finger foods so it doesn’t slow down my typing.  Music: Something that sets the mood I’m writing. I like to listen to acoustic guitar (my son’s recordings) Enya, movie soundtracks like Cold Mountain, The Village, Outlander, Braveheart. I like Moby, Coldplay, Loreena McKinnett, Crowded House and the list goes on…

I’m a plotter/pantser. I have a general idea of where I want to story to go. It comes to me in scenes. It works better for me to write, write, write, and get my ideas down, then go back and whip them into shape.

My biggest supporters in my effort to be published have been my family. They listen to my ideas, help me get past my blocks, listen to me whine, or listen to me period!! (I do get carried away sometimes) And I can’t forget my writer friends who brainstorm with me when I’m stuck.

The most important thing I’ve learned about this experience is never ever give up. Someone once told me “There is nothing about your story that can’t be fixed. You are the author, after all. You can fill the plot holes, flesh it out, expand, or condense, learn to say things better and improve. My least favorite thing about the process is the waiting. I’m an impatient person.

I’ve just finished a fantasy romance, In My Own Shadow and have begun submitting. At the moment I’m writing the sequel to Not Long Ago. (My daughter insisted the story wasn’t done and I agreed, so I had to continue.) 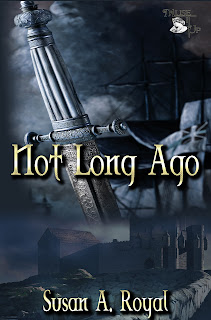 Blurb:
Erin has met the man of her dreams, but as usual there are complications. It’s one of those long distance relationships, and Griffin is a little behind the times-- somewhere around 600 years.

Erin and her employer, March, are transported to a time where chivalry and religion exist alongside brutality and superstition. Something’s not quite right at the castle, and Erin and March feel sure mysterious Lady Isobeil is involved. But Erin must cope with crop circles, ghosts, a kidnapping and death before the truth of her journey is revealed.

Forced to pose as March’s nephew, Erin finds employment as handsome Sir Griffin’s squire. She’s immediately attracted to him and grows to admire his courage, quiet nobility and devotion to duty. Yet, she must deny her feelings. Her world is centuries away, and she wants to go home. But, Erin can’t stop thinking about her knight in shining armor.

Not Long Ago is available through MuseItUp, Amazon and B&N
Excerpt:
I saw him the other day. It happened when I cut across Market Street and passed in front of the fancy new coffee shop. On the other side of spotless glass, waitresses in crisp black uniforms served expensive coffee in fancy cups and saucers. One man sat alone at a table by the window. No one I knew, just a nice looking stranger who looked up as I passed. We exchanged glances and I froze in the middle of a busy sidewalk crowded with impatient people. Annoyed, they parted, sweeping past me like water rushing downstream.

What I saw left me reeling, as though someone had knocked the wind out of me. My glimpse deep inside the man’s essence unnerved me, but I couldn’t look away. Who was he? The waitress stopped at his table. He turned, lowering his cup into its saucer and shook his head, his mouth curving into a familiar smile that made my heart lurch.

After she left, his eyes returned to mine. A moment before, I thought they’d held a spark of recognition. Now, I saw nothing. I felt cold, as though he’d slammed a door in my face and left me standing outside in the rain.

I had no other choice but to move on.

It wasn’t just recognition—I knew things about him too. Things I had no reason to know. An image flashed in my mind: the curl of hair at the nape of his neck; a scar snaking down his arm. I’d put it there, after all.

I knew the man before me was an excellent horseman, accomplished swordsman, and an honorable man. Beyond the shadow of a doubt. How could I be so certain?

Teresa Reasor said…
I love medieval romances, timetravels, history, you name it. I bought yours, tweeted it, facebooked it, and I know I'll enjoy it.
Write on,
Teresa R.
June 29, 2012 at 10:51 AM

Shirley Martin said…
Interesting article by Susan A. Royal. "Not Long Ago" sounds like my kind of book. I, too, enjoy fantasy and paranormal romances.