Tuesday Guest Blog: The Evolution of a Romance Reader

September 27, 2011
by Trish McCallan
I’ve been a reader for as long as I can remember. Back in grade school I devoured any book that had an animal in it. I went through all the dog books, all the horse books, all the pig, cat, chicken, goat, mule, deer and spider books that our local library had. I used to bike there every couple of days with a basket full of books and return with a basketful of books.  My mom used to laughingly claim that I missed every family vacation because I had my nose buried in between the pages.
Even then I wanted my happy ending. I hated books where the animal died. Hated them. Hated them. Hated them. I wouldn’t even check them out. I’d ask the clerk at the counter. Lassie doesn’t die, does she? Or the Black Stallion’s Minx doesn’t die, does she. Old Yeller doesn’t—he does? Back on the shelf it would go.
So looking back, romances and I were a natural fit. I wanted a happy ending, even back then—without knowing what a happy ending was—that’s what I was looking for.
I still remember stumbling across my first romance. I was a teenager at the time, around fifteen, still on a horse kick. And someone loaned me a book about a city girl who gets shipped to her grandparents for the summer and rescues a starving horse.  There was a boy in this book. A local cutie, who happened to be the town’s expert on horses.  He helped the heroine nurse her horse back to heath. I guess you’d call it a sweet young adult romance. I think there some kissing, but that was all. I devoured it, and it wasn’t the horse action I was hooked on! After I finished the book, I biked to my local bookstore to buy more. Problem was he didn’t have anything else like it, instead he pointed me to the Barbara Cartland section of the wall.  I didn’t know enough to look at the blurb, so I bought the books that had a horse on the cover. *g
And that’s how I discovered romances. I bought from Barbara Cartland’s shelf until there were none left, and then I moved down the row, which happened to be Harlequin presents.  I used to save up my allowance, and my paper route money and I’d spend every penny on books. I never saved a dime because I was always buying books.  These, you see, weren’t books I could find in the children’s section of our local library. I didn’t know enough to look in the adult section.
And then, wonder of wonders, I discovered I could get these same books really, really cheap at the local Goodwill. So I used to go down and buy shopping bags full of them. At the Goodwill, there were other romances too, historicals mostly. So I bought them as well. I was in high school by then, and most definitely did not need sex education.
I read my first romantic suspense while in college. It was from the now dissolved Silhouette Intimate Moments line, and they quickly became my favorites. I knew exactly when to expect the new releases to arrive and I’d buy every single one of them. This is where I discovered Linda Howard, Suzanne Brockmann, Rachel Lee, Kylie Brant, and a host of other romantic suspense authors. When my favorite authors moved to single title, I followed them. As the category lines became more and more bogged down with clichéd storylines, I branched out into single title romantic suspense and pretty much stayed there.
I’ve read almost everything through the years, with the exception of inspirationals. But my two favorite genres have always been romantic suspense and paranormal.  It’s no surprise, I suppose, that every single book I’ve written combines these two elements.
So tell me, do you remember the first romance you read? How did you find it? And what did you move onto from there? What was your evolution as a romance reader? 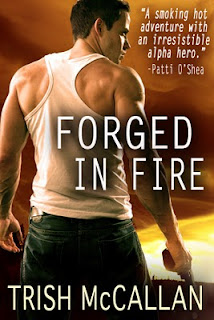 Blurb:
Beth Brown doesn’t believe in premonitions until she dreams a sexy stranger is gunned down during the brutal hijacking of a commercial airliner. When events in her dream start coming true, she heads to the flight’s departure gate. To her shock, she recognizes the man she’d watched die the night before.
Lieutenant Commander Zane Winters comes from a bloodline of elite warriors with psychic abilities. When Zane and two of his platoon buddies arrive at Sea-Tac Airport, he has a vision of his teammates’ corpses. Then she arrives—a leggy blonde who sets off a different kind of alarm.
As Beth teams up with Zane, they discover the hijacking is the first step in a secret cartel’s deadly global agenda and that key personnel within the FBI are compromised. To survive the forces mobilizing against them, Beth will need to open herself to a psychic connection with the sexy SEAL who claims to be her soul mate.
"Forged In Fire is a smoking hot adventure with an irresistible alpha hero. Danger, action, suspense, and a steamy romance make a story that's impossible to put down!"

Patti O'Shea, National Bestselling Author of Through a Crimson Veil

Harlie Williams said…
Great post and you are a new to me author. My first true romance was Lucky by Sandra Brown and my mother gave it to me to read. Yes, my mother and she had just finished it. And yes, I'm that old. Great book and it got me hooked.

I worship at the feet of Linda Howard.

I still go to Goodwill and Half Price books for the Intimate Moments books. LOL!
September 27, 2011 at 8:23 PM

I'm pretty much a new to everyone author. lol

And I'm sorry, but I will have to fight you to preserve my status of Linda Howard's NUMBER ONE FAN!

You may worship at her alter, but only behind me. By the way, from one LH worshiper to another, there is a huge tribute to Linda Howard in Forged in Fire. And not ONE so so-called-Linda Howard fan, has noticed this yet. *g

I've heard of alot of mothers giving their daughters their first romance to read. Mine never read romance, she gave me books like The Shipping News instead.

Harlie Williams said…
I will stand with you on Linda Howard. She is the bomb!

Layna Pimentel said…
Hmmm I'd have to say my first 'true' romance novel was The Wedding by Julie Garwood.Nothing like a good Highlander book to whisk you away into dreaminess.

It took me a very long time before I started reading regencies, and I only just started to read romance/suspense books. What a trip it's been.

The only evolution I've made as a romance reader has been in becoming an addict. LOL Who else do you know that spends 2k+ a year on romance novels?

PamelaTurner said…
I can't believe I keep forgetting this. Thank you, Trish, for guest blogging. And thank you Harlie and Layna for also stopping by and commenting.

It wasn't horrible, but--you know- it wasn't a romance. lol

I love Julie Garwood. I've read all her historicals and yeah, the Wedding was one of my favorites. But so was The Secret. But I think my favorite was Honor's Splendor. Loved that book. In fact, I need to find another copy.
September 29, 2011 at 10:24 PM

Trish said…
Pamela, thank you for having me!

How do you want to do the give away? Do you want to draw the name? Or should I. Or Heck. I'll just give both a free download. Yeah!!

So Harlie, email me at trishmccallan@yahoo.com and I'll send you a free download coupon for Forged in Fire! Same with you Layna. And Pamela I'll email you a code here in just a bit.
September 29, 2011 at 10:26 PM

PamelaTurner said…
Thanks so much, Trish. Really appreciate your generosity. :-) Look forward to reading Forged in Fire.
September 29, 2011 at 10:29 PM