Welcome Tylluan Penry to Darkling Delights, author of "The Legend of Merv the Swerve" in Among the Headstones: Creepy Tales from the Graveyard. Read on to discover how she dealt with a family curse.

Dealing with Ghosts and Curses

The first time I had to banish something was when I was about sixteen. An aunt came to stay with us on holiday. She took over my room, and I had to sleep on the floor in my parents’ room. Long story short, there was a family row (there were many of those during my childhood) and since both my mother and the aunt were witches of a particularly nasty disposition, it did not end well. My aunt placed a horrible curse on my father, and some of this invaded the rest of the house, too. People often don’t understand how curses can spread, so we ended up with whispering coming out of the walls, strange shadows, more footsteps than usual… there was a limit to what could be tolerated, even by us.

At that time, there were no books to help. My father’s friend (who was very interested in the occult) advised me to look for anything made of hair, skin, fur or even grass that the aunt could have left at our house. And it was then I discovered two important things: firstly, that yes, there was a native style picture using just those materials, that my aunt had hidden it amongst the books on the bookshelf, and secondly that it is possible to convey a hex on a tea towel. I kid you not. It can be done. And Auntie did it.

Worst of all however, was seeing how my aunt’s curse affected my father. His health went rapidly downhill after that, and nobody was willing to put two and two together and do anything about it. He quite literally shrank. My mother could make people fall on the forecourt of a local garage, and summon up all sorts of nasties when she wished, but she either could not or would not do anything about my father.

So this, (and the tea towel, of course,) made me realise how important it was to deal with curses before they had chance to start working. They are more common than we think, and usually conveyed using rage and spite rather than elaborate ceremonial magic.

I wasn’t strong enough to save my father from that curse, but I did try. Afterwards I kept learning better methods, stronger defences, which was just as well because the hexes my mother sent my way were horrendous. One of them put me in hospital. I can’t describe what it feels like to have something like that burning into your back.

The odd thing was however, I was heavily pregnant at the time, and when my daughter was born, she had a birthmark on the exact same place on her back. 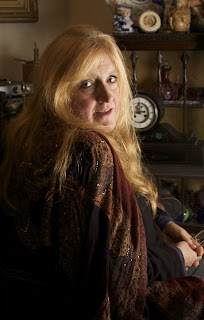 Tylluan Penry is a pagan solitary witch who has devoted much of her life to teaching about the Craft. She was born and brought up in a family of witches (on her mother’s side) although all they ever did was hex. It was a horror story in its own right! When she managed to leave this tradition (and her family, though it wasn’t easy) she moved on to develop her own solitary path which she called ‘Seeking the Green.’ Over the years she has developed this further and written about many topics including Ice Age spirituality, the Anglo-Saxons, knot magic and magic on the breath.

She is married, has a large family, including grandchildren, dogs, and lives in a rather ramshackle home with an overgrown garden, together with ghosts, spirits and the Gentle Folk. There is a huge cemetery opposite her home which ought to be scary but is actually very serene and peaceful. She has always loved writing, and wrote her first (very) short story when she was six, soon progressing to full length stories. She has now written almost 30 books, both fiction and non-fiction. Most can be found here: https://shop.thewolfenhowlepress.com/

Some of her fiction is on Kindle under the name T P Penry. Her chapter in the anthology, ‘Among the Headstones’ is based firmly in Wales, with a smattering of golf balls, gravestones and the Highway Code. She has always believed that creepy stories need a good pinch of humour in order to work well (at least, in her experience.)

Tylluan also has a YouTube Channel, with over two hundred videos about solitary witchcraft here: https://www.youtube.com/channel/UC48MN8sa7_lFsBX9v2ZAeAg/videos 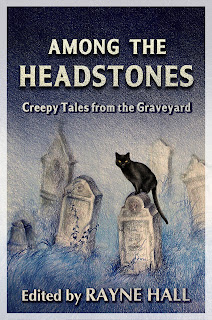 The ebook is available for pre-order from Amazon at the special offer price of 99 cents until 31 January 2022. (After that date, the price will go up.) A paperback is about to be published.

Priscilla Bettis said…
What a frightening childhood memory and so much for a child to deal with! I'm certainly looking forward to reading Tylluan's story in Among the Headstones!
January 7, 2022 at 6:17 AM