Illusions of a Quiet Cul-de-Sac 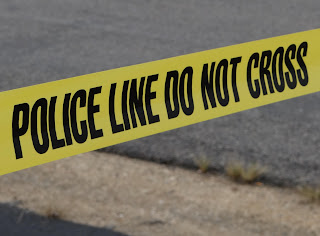 Usually, on this blog, I write about my publishing and writing experiences. But something happened on March 25 that put our cul-de-sac in our subdivision in the local news, and not for a good reason.

I never heard the gunshot(s). And the presence of police cruisers and an ambulance in our cul-de-sac normally didn't raise any undue concern.

But the yellow crime scene tape promised a different story, one that would involve someone I knew.

The ambulance slipped away, sans siren.

For the first time, a murder had occurred on our street. Supposedly, a young man had shot and killed his girlfriend. (I'm only saying this because although there's been an arrest, the suspect's preliminary hearing isn't until tomorrow.)

My husband knew the suspect, and we both knew another man who also lived in the house where the shooting took place a few doors down from us. This is the closest I've been to knowing someone who's been directly or indirectly involved in a murder.

The police had put crime scene tape up at the end of our street. That's where the reporters had set up cameras and interviewed neighbors, including a woman who claimed the suspect had sped through the stop sign. I can believe it.

Our driveway wasn't blocked, but police had put up crime scene tape across the street close to the crime scene, using mail boxes to tie the tape around. I counted four or five police cruisers on our end of the cul-de-sac, with one cruiser at the end of our street. Occasionally, another cruiser joined the latter, effectively cutting off access to our street.

We'd experienced the same thing last summer when the SWAT team had been summoned the next street over.

Quiet neighborhood? Yeah, right. Since I've lived here, besides the SWAT incident, we've had a field set on fire, a break-in next door, a break-in in a local church, and a self-inflicted gun shooting. Before that? My husband told me a fire had broken out in the woods nearby, and a bullet had nearly hit his daughter during deer hunting season.

But this was the first time we'd experienced a murder.

That day was the first time I met a homicide detective working a case. We gave him some information we had, but I'll say no more here. If it helps the investigation, so much the better.

Now I know what the back interior of a CSU vehicle looks like (at least here), and I watched crime scene investigators, homicide detectives, and the deputy coroner work the crime scene inasmuch as I could.

Eight hours later, they took down the yellow tape.

Crime scene investigation fascinates me, but I prefer to watch it on a station like the Justice Network. Because when it hits close to home, it has a profound effect, not only on the victim and suspect and their friends and family, but also on those who live in the area.

Before the murder, I wondered how many people even knew this street existed. Now we do, in infamy. Yes, the memory will fade as people resume their lives. But for those of us involved in some way, however small, the memory will linger much longer.

PamelaTurner said…
Thanks, Juli! I feel for the victim's three year old daughter. Luckily, she wasn't in said house, but apparently was at her grandparent's.
August 5, 2016 at 11:38 PM

Unknown said…
Earthling...
Q: what's the MOST important objective
N our lifelong demise determined by us?
A: achieving Seventh-Heaven: in the
Great Beyond, everythang is possible.

When our eternal soul leaves our body at death
and we riseabove to meet our Maker,
only four, last things remain:
death, judgement, Heaven or Hell
according to the deeds WEE mortals
have done in our Finite Existence.
Find-out what RCIA means and join.

PS° I'm a re-boot NDE:
if you're RIGHT,
you'll see the LIGHT -
follow that to the Elysian Fields.
Let's be tethered2forever Upstairs.