December 18, 2012
“LABOR DAY SPECIAL! SAIL THE METHANE LAKES OF TITAN IN THE ROMANTIC LIGHT OF SATURN AND HER RINGS!”

Or, “PARTY OF THE CENTURY! WELCOME THE NEW YEAR ON THE OBSERVATION DECK OVERLOOKING BEAUTIFUL JUPITER AND THE GREAT RED SPOT!”

Well, the idea isn’t so far fetched. As humanity journeys outward into the universe, I’m sure we’ll take many of our customs and traditions with us. Sometimes they’ll no longer be relevant, but they’ll still be a part of us. For awhile, at least.

I like writing speculative fiction, or science fiction if you will. I like writing of star ships exploring the universe, humans colonizing planets, and of the “Earth-born” and the “star-born.” I’m sure that just as the American colonists developed their own customs and traditions separate from the “mother country” of Great Britain, the star-born will someday chart their own path. After all, being born among the stars separates them from those of us born on Earth. They may regard the Earth as being the womb of life, just as many of us consider the oceans to be the womb from which life began.

But, I’m getting ahead of myself. I do that sometimes.

Sometimes I wonder what celebrating Thanksgiving (American holiday), Christmas, or New Year’s, would be like, “out there.” If Mars is the first focus of colonization, then I think such holidays will still be celebrated.

Anyway, New Year’s, well, observe the date of the Earth New Year’s, or adjust for the year of a new world? For example, Mars takes 687 days to orbit the sun (Wikipedia). Stick to an informal 365-day New Year’s celebration, followed by a formal 687-day New Year celebration? Or what of Christmas? Stick to the Earth calendar, and informally celebrate Christmas, or officially celebrate Christmas according to the time of Mars’ orbit? Such questions become more interesting the further out we go—Jupiter orbits the sun every 11.86 years (Wikipedia), and Saturn orbits every 29 ½ years (Wikipedia). And those questions become even more interesting again, the further out we go.

People being what we are, I can see a few discussions about this devolve into name-calling and fist fights.

I suppose the first Thanksgiving will always be a special one for those first pioneers who pave the way for others to follow. They’ll be the first in such a harsh, alien environment that allows little room for error. Perhaps they’ll eat Thanksgiving dinner in a decorated, otherwise plain military style messhall. Maybe real turkeys will have been brought from Earth. All morning long the wonderful, homey scent of baking turkey, stuffing, vegetables, and biscuits will waft through the artificial womb that protects them, and allows them to live.

Christmas might be another story as humanity travels further. After years of struggle by the first pioneers, real Christmas trees in all of their glorious “Christmasy scent” might finally make it all the way to Mars. Real toys too, as by then there might actually be children on Mars. And by then the people might be a combination of Earth-born and Mars-born. Some might remember an old family tradition of chopping down and bringing home the Christmas tree, while others will have never seen one—especially the younger children. Maybe someone might order a real Yule Log, just to keep traditions alive on that distant, rocky, reddish sand world.

New Year’s—well, regardless of whether one celebrates according to an Earth calendar or a space calendar, imagine celebrating New Year’s dancing before Jupiter’s Great Red Spot, or kissing your loved one in the shadow of Saturn’s rings. Those would be celebrations worth attending, whether for real, or through writing speculative fiction.

Happy Holidays to everyone! 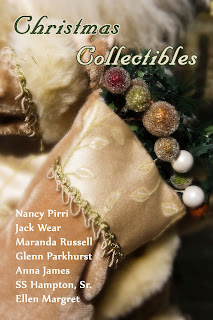 BLURB: Christmas is a time of good cheer and gift giving. But sometimes the gift giving can be more important than anyone could imagine…

EXCERPT: The world was a stinging, churning cloud of smoke and dust. The air was so hot that it parched a throat already dry and sucked the moisture out of the exhausted body so that the skin resembled charred leather. Muffled popping sounds hurt already ringing ears and brought a reaction of crouching with hands clenching desperately at empty air. Blind skeletal hands thrust forward desperately as a way was sought out of the thick, scorching clouds.

Screams echoed within the boiling clouds as the skeletal hands burst into bright, smoky flames…

Tommy Simpson shot upright from his bed, gasping wildly as his wide eyes swept the darkness of the bedroom. He ran a hand across his face and sat down on the edge of the bed with his painfully throbbing head lowered. A glance at the digital clock showed 12 – but was it midnight or noon?

He stealthily opened the door and looked down the hallway; dim lights flickered in the living room. He wrinkled his nose and smelled coffee and cooking food, and heard the tinny music of “Grandma Got Run Over By A Reindeer.” Over all hung the sweet, mysterious aroma of burning cedar wood.

He ventured down the hallway and peeked into the kitchen.

“Hey sleepy head,” a fleshy, full bodied woman with long black hair dressed in a thin t-shirt and jean shorts cheerfully greeted him. “It’s about time you got up. It’s noon!”

“Aunt Jenny?” he whispered in surprise.

“The one and only,” Jenny Danner, Ph.D., laughed. “Coffee? I assume that now that you’re a mn you drink coffee?”

“Uh, yeah,” he nodded as he rubbed his painful temples and ventured to the bar stools that lined the wood and granite island between the kitchen and dining room. “Coffee, beer, rum and coke, and rum and egg nog, too.”

“Didn’t your mom tell you I was visiting?”

“No. She’s kinda wrapped up in her boyfriend, Willy Deal the used car salesman.”

“Well, I’m visiting for the holidays,” she said as she placed coffee, sugar, and Irish creamer before him. She held a dirty beer mug up. “Rum and egg nog last night?”

“It’s the holidays,” he replied half-heartedly as he prepared his coffee… 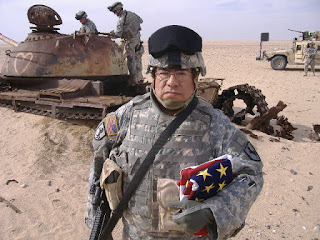 SS Hampton, Sr. is a full-blood Choctaw of the Choctaw Nation of Oklahoma, a divorced grandfather to 13 grandchildren, and a veteran of Operations Noble Eagle (2004-2006) and Iraqi Freedom (2006-2007). He served in the active duty Army (1974-1985), the Army Individual Reserve (1985-1995) (mobilized for the Persian Gulf War), and enlisted in the Army National Guard in October 2004; he was mobilized for active duty for almost three years after his enlistment. He continues to serve in the Guard, where he holds the rank of staff sergeant. He is a published photographer and photojournalist, an aspiring painter, and is studying for a degree in anthropology—hopefully to someday work in underwater archaeology. He has wanted to be a writer since he was 15 years old; his first short story was published in 1992, after which it wasn’t until 2001 that he had another short story published. His writings have appeared as stand-alone stories, and in anthologies from Dark Opus Press, Edge Science Fiction & Fantasy, Melange Books, Musa Publishing, MuseItUp Publishing, Ravenous Romance, and as stand-alone stories in Horror Bound Magazine, Ruthie’s Club, Lucrezia Magazine, The Harrow, and River Walk Journal, among others. As of December 2011, he became the latest homeless Iraq war veteran in Las Vegas, Nevada.

Teresa Reasor said…
I'm trying again since blogger decided to eat my comment.
I enjoyed your blog very much. And I'd be one of those people first in line on the space ship to go to Mars, Saturn, the great beyond. I'd love it.
I enjoyed your excerpt too and will check out the anthology.
God Bless,
Teresa R.
December 18, 2012 at 1:40 PM

Thank you for visiting. I'm glad you enjoyed the excerpt, and that you enjoy the anthology.

Unknown said…
This was a very interesting blog but I do think anyone who was born on Mars would want their own holidays eventually, maybe something to do with the sun rising in 13 years or something. If I was younger, I might have a goal of going to outer space but not now. Great bio, too.
December 20, 2012 at 6:03 AM

I'm very late, but thank you for visiting, and for your comment. I appreciate it.