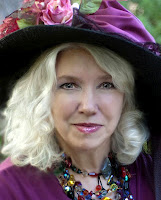 Taryn Raye said…
Wow...That is interesting and weird. I remember in 5th grade having to read a book on Joan of Arc and do a book report on her, but I don't remember anything about this man.