July 04, 2012
I would say I'm decompressing from Fandom Fest, but I've assignments and edits to catch up on. Like Warren Zevon said in his titular song, "I'll sleep when I'm dead."

But this isn't about sleeping or zombies or... Wait. Yes, there were zombies there. Not real ones of course, although that would be interesting. I even saw a Zombie Gumby. And the halls teemed with Star Wars stormtroopers, Ghost Busters, Goths, Steampunk, the whole spectrum of the horror/fantasy/sci-fi/speculative fiction universe.

All this took place at the Galt House. This is the hotel's first year hosting Fandom Fest/Fright Night Film Festival so I hope they were prepared for the weird, wacky, and wonderful denizens who converged upon downtown Louisville. 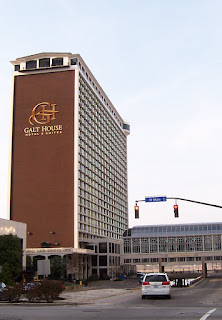 For the second year, I attended as an author and panelist. I was on three panels: "Horror Writing Perspectives from Female Authors", "Exploring Genres: Paranormal Thrillers", and "The Perfect Kill".

More about that later. This year, it wasn't so much about the panels as it was about networking. Many small press publishers had tables in the Dealer Room and I visited as many as I could. Some publishers I'd met last year, including Jason Sizemore of Apex Publications, Allan Gilbreath of Kerlak Publishing, and Eric Beebe of Post Mortem Press. It was nice to chat with them again and I hope to submit some stories to them in the near future.


Also enjoyed meeting authors, both old and new. Horror/erotica author Christian Jensen offered to share his table but it turned out there was one available next to him. I didn't have any books, but I did bring "bags of swag", postcards, business cards, pens, collector cards, and yes, candy, to bribe the masses. By Saturday, all of my blue swag bags were gone. I also had people sign up for a gift basket and received 14 entries. Not bad for a first time. :-) 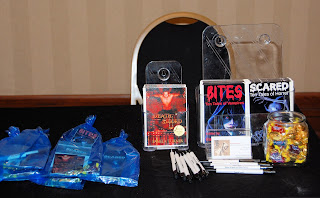 That said, you don't want to know how stoked I was at hearing Richard Kadrey and Angie Fox would be there as two Author Guests of Honor. Hell, I'd beg, steal, or find the money some way to see them. And, of course, I went all fan girl on them. Geez, how embarrassing! They were very nice about it, though, and signed my books and let me take their photos.

But the really cool thing? Angie must have seen my author badge and asked me what I wrote. When I told her, she was like, "Cool. Did you bring anything?" I told her I didn't have any print books, being e-pubbed but I had postcards of my books. She asked if she could have them and I said "Sure." As if I would refuse her. LOL I also asked Richard if he wanted any. After all, it would be rude for me not to offer since he was sitting right there. Of course, I suspect they were only being polite but one never knows, and it's nice meeting authors who take time out for their readers.

Let's see, where was I? Oh, yes, right, back to "normal", or as near normal as I can get. Hey, you can't blame me for being all giddy meeting two of my favorite authors. I also went into fan girl mode when I met Sherrilyn Kenyon at Hypericon a couple years ago. One author told me it took her three times before she stopped geeking out in front of her favorite writer. Apparently, I'm not the only one who does this.

Oh, yeah, I promised to talk about the panels. Well, it was definitely interesting. I enjoyed the ones I was on
but snafus kept our audience attendance low. Nevertheless, even one person is an audience and we all respected that. In fact, it became more of a dialogue between us and the attendees and that was even more fun.

Maybe I didn't sell any books, but I got inspired to write. Angie Fox was telling us in her Q&A about the problems she went through as a writer and I thought, "Damn, I'm going through that now." So it was very inspiring to hear I'm not alone in many of my writing struggles. Gives me hope to keep on.

If you'd like to see more pictures from Fandom Fest, you can find them here:

Marian Allen said…
It was great to see you again! Next year, I don't think we're going to tie ourselves to a table, so we'll be free to mingle more and geek out along with you! :)

Unknown said…
I didn't make it to all your panels, but the two I attended were great.

Thanks for telling me about this Pam. I have been passing the word along about Fandom Fest.
July 4, 2012 at 9:14 PM

Teresa Reasor said…
I'm so disappointed I didn't get to come. I had family issues that I couldn't get out of but next year I'M COMING. It sounds like such fun and since I'm getting deeper and deeper into the paranormal stuff recently, maybe I'll have another book out by then.

Carla, thank you! It was a blast.

Donna, glad you could make it. Thanks for passing the word. FF & Stephen definitely need the community's support.

Gerri, it was. FF is a great place to meet new authors and publishers.

Sara-Jayne, you'd probably enjoy it if you came. Not sure about our weather though. :-)

Nerine, squeeing because your book is prominently displayed is perfectly fine. Squeeing because Angie Fox and Richard Kadrey are sitting right in front of you... Maybe not. LOL

Teresa, I hope you can make it. I don't know what Stephen plans to do with the literary panel next year but he's probably already started thinking about it.
July 5, 2012 at 11:45 PM