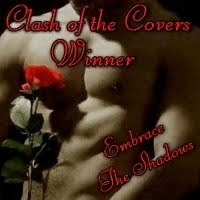 Shortly after I received my cover for Death Sword, an administrator from Embrace the Shadows notified me it was chosen as one of three book covers for their weekly "Clash of the Covers (9/6/10)."

I was surprised but delighted. The other covers were well done, which meant serious competition. If I wanted to win, I needed to put forth an effort and get votes.

And I did. I contacted people on my Twitter, Facebook, MySpace, and other sites. While I couldn't force people to vote for me, I could at least ask them to and thank them for their time.

For a while, one cover and mine were tied. The other pulled ahead. Although I put out a final plea for votes, I resigned myself to the fact I'd lost. Then I realized I hadn't failed because I gained the following:

1) Exposure. Even though Death Sword isn't slated to come out til Spring 2011, people already know of its existence. Since the cover on Embrace the Shadows links to my publisher, potential readers will know where to buy it.

2) Marketing/Promotional Opportunities. Today's authors need to be publicists as well. We need to make readers aware of our work. If I didn't ask for those votes, didn't take a proactive stance in my career, I would have watched my cover linger, probably in last place. It doesn't hurt to ask for something, as long as you're polite and not demanding.

3) The knowledge someone liked my cover enough to nominate it and others thought it was worthy to vote for.

Imagine my surprise when I went to the site on Tuesday and found the Death Sword cover had won. Maybe another author would consider this a small insignificant triumph, but for a soon-to-be published author like me, any success is significant.

So for those of you who voted for the cover, thank you for your support. I appreciate it more than you realize. :-)
contests Death Sword Embrace the Shadows promotion

Sondrae Bennett said…
I don't think anyone would consider that a "small insignificant triumph"! It's fantastic! Congratulations!
September 9, 2010 at 11:29 PM

PamelaTurner said…
Thank you! I'll admit I was surprised when I won. Usually, I drag my husband over to my computer and make him confirm such things for me. LOL
September 10, 2010 at 3:41 PM