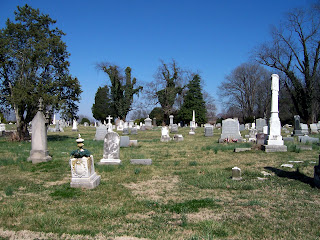 Eastern Cemetery has held a special place in my heart for years. In 2004, I wrote an article for Speak Out!! Magazine, a now-defunct publication. I'm posting it here not because I plan to include articles with all Wednesday photo postings, but because Eastern is a part of Louisville's history and should not be forgotten.

"Requiem for a Cemetery"
by Pamela Turner
(Originally appeared in Speak Out!! Magazine, November 2004)

If Eastern Cemetery is haunted, its ghosts have every right to be angry at the wretched conditions in which their remains are interred. Several headstones appear as if a giant's sharp-toothed mouth crunched them in half, leaving only chunks of granite and marble. Other tombstones are toppled, lying beside their foundations in various askew positions. One grave marker sinks into a hole. Still others are overgrown with grass and unnoticed until one trips over them. One statue stands atop a burial site, its head missing. Whether taken by trophy hunters or vandals, no one knows.

Much has been made about the deplorable conditions of Eastern Cemetery, but even today it remains sans ownership, its fate to be decided by the Jefferson County Court system and the state attorney's office. Once owned by the Louisville Crematory and Cemetery Company, Inc., Eastern Cemetery was established as the Eastern Cemetery Corporation by the Kentucky General Assembly on March 4, 1854. At 30+/- acres, it is dwarfed by its neighbor, the renowned 296-acre Cave Hill Cemetery, which counts as among its famous dead Colonel Harland Sanders, James Graham Brown and Louis Seelbach. Not that famous people aren't buried at Eastern. They include Methodist Bishop Henry Bidleman Bascom and former Kentucky State Congressman Charles W. Anderson, Jr.

So why is Eastern Cemetery in such a horrid state while Cave Hill, divided only by a ten-foot brick wall, thrives and flourishes? The first answer is that the Louisville Crematory and Cemetery Company, Inc., which owned Eastern as well as Greenwood and Schardein cemeteries, went bankrupt and defunct in the early 1990's. According to the Task Force on the Preservation of Kentucky Cemeteries' Final Report, "the cemetery (Eastern) had over a number of years engaged in a pattern of multiple burials and grave desecrations."

And the situation worsened. Maurice Phillips, appointed by the Jefferson County courts as a receiver from January 1, 1999 to February 2001, was ultimately removed from his post by Jefferson County Circuit Judge Tom McDonald. According to the Courier-Journal (May 26, 2001), assistant attorney general Harold Turner stated that "he thinks Maurice Phillips, the receiver, either misspent or improperly accounted for $98,541" out of a $500,000 operating account meant for the care of the three cemeteries.

The Courier-Journal article continues that in April 2001, the "Louisville Board of Aldermen allotted $20,000 last month to Dismas Charities to buy equipment to maintain the cemeteries. At the court's request, Dismas has begun regular maintenance, using free inmate labor and $2,000 in monthly interest income from the perpetual-care fund for a supervisor, fuel and other expenses."

Robert Lanning of Dismas Charities admits in a recent phone interview that the task of maintaining the cemeteries is difficult. "We don't make money," he points out, "we turn in receipts and get reimbursed." The last reimbursement was for May 2004 and included money for gas, repairs to equipment, goggles, weed eaters, etc. Only the supervisor is paid. Lanning adds the inmate laborers aren't always motivated, the money is less each year, and the equipment is aging.

And then there are the vandals who broke into the chapel and spray painted it and also stole ashes from the storage building. The chapel has since been boarded up and secured. Lanning points out there hasn't been much vandalism lately, although the police have been to Eastern several times and caught young people drinking. Because there is an apartment complex on the property, there is no way to lock the cemetery gates.

Robert Lanning insists that Eastern Cemetery needs volunteers to take care of it, not only to trim and mow but to help supervise the workers on the weekends and take up special projects.

Perhaps one statue best expresses the feelings of those buried here and their families. It's the figure of a young woman sitting atop a monument, head tilted, her cheek resting against the back of her hand. Her expression is sad and reflective, perhaps mourning not only the death of her loved ones but also the deterioration of a historically significant cemetery.

Although years have passed since this article, I still plan to follow up on what happened to Eastern as well as Schardein and Greenwood. When I do, I'll keep you posted.

You can see more photos of Eastern at my Flickr page:
http://bit.ly/cylBIv